Toxoplasmosis and pregnancy: myths to dispel

Too often cats become the unfortunate and unaware victims of misinformation about toxoplasmosis, a nasty disease that can cause serious harm in pregnant women. In fact, many families abandon or leave their beloved cat before pregnancy or when the baby arrives because of this. But this unhappy decision is not absolutely necessary: let's find out why.

As we have widely discussed in the article entirely dedicated to the topic (you can consult it by clicking on this link), toxoplasmosis is a parasitic infectious disease caused by a protozoa, called Toxoplasma gondii. We will try to simplify the behavior of this small parasite as much as possible. 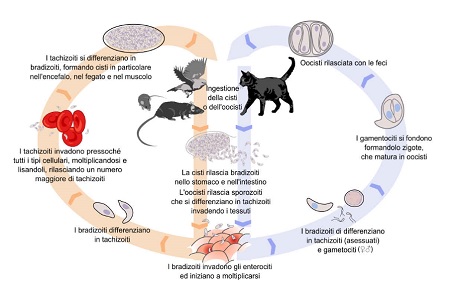 The cat eliminates the "eggs" of Toxoplasma contained inside the feces in the litter, in the garden or in the fields. These "eggs" are not yet dangerous, but after about 24-48 hours they are, at a temperature of about 24 ° C and with high humidity. After this period of time, if they are ingested by man, other cats, dogs, mice, birds and animals in general they arrive in the intestine, they hatch and end up in the blood. From here they manage to travel to different locations, among which the most important are the muscles, but sometimes they manage to reach the eyes, brain, heart, liver or lungs. Once they have settled in a location, they incorporate into a protective cyst. When the cat hunts a small prey containing these cysts, even if we offer him contaminated raw meat, he will also clearly take on the parasite, which will be able to reproduce itself until it produces and eliminates new "eggs". This is how the cycle starts again.

What causes this parasite in the body?

In most cases absolutely nothing, both in humans and in animals. At most, we might feel tired, exhausted and perhaps with a little diarrhea and fever, but nothing more. On the other hand, if we talk about people or animals whose immune system is not strong enough, the consequences can be more serious, with the presence of encephalitis, epilepsy, vestibular syndrome or eye inflammations - uveitis in cats, chorioretinitis in humans – lungs, heart and liver problems.

What are the risks in pregnancy?

Pregnant women is also an important topic. In fact, Toxoplasma gondii is able to cross the placenta until it reaches the fetus. In these cases it can cause different consequences depending on the period of gestation. In short words, the first six months are the most critical period for the fetus, which does not yet have adequate defenses to prevent the parasite from colonizing and damaging it.

The consequences range from abortion or children with serious neurological malformations. Among these, the main consequences are blindness, mental retardation, epilepsy. As you approach the end of pregnancy, however, the chances of the baby being born healthy increases.

However, it must be considered that, if the consequences for the fetus are greater in the early and mid-pregnancy, the risk that Toxoplasma gondii will actually manage to infect is minor. In short words, in the first few months it is more difficult for the parasite to reach the fetus, but if it manages to do so, the consequences would be very serious. On the contrary, in the last three months it can more easily infect it, but it is no longer so dangerous.

How to avoid toxoplasmosis

We now come to the most important point. Too many myths and urban legends are circulating about toxoplasmosis, particularly about proximity to cats. We think of the hundreds of women who, as soon as they discover they are having a baby, send away the much loved pet forever. Of course, the fear of pregnancy is absolutely understandable, but the only thing you really need is a correct and scientific information about this disease.

We think that the chances of the cat being able to transmit the infection to humans are very low. Let's explain why:

So how is toxoplasmosis transmitted?

Well, dear future mothers, you should know that toxoplasmosis is most of all transmitted through food and bad habits. In particular: 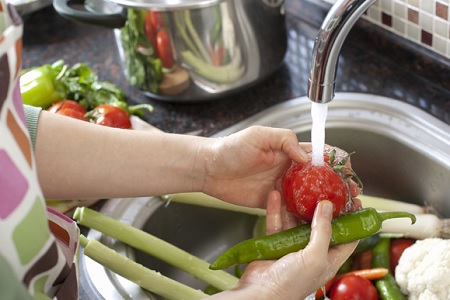 The test for toxoplasmosis in pregnancy

A simple blood test is always recommended to all women who are planning a pregnancy or who are already pregnant. This test looks for two different types of antibodies to the parasite: IgM and IgG. IgM are the first to be produced when it comes into contact with a microorganism, but they also disappear quickly, in a maximum of 2-3 weeks. On the contrary, IgG are produced immediately after, but they last for a long time, guaranteeing good protection for the woman and also for her baby, regardless of the period of pregnancy. Test results can be different:

Even amniocentesis is able to provide a good diagnosis on the possible presence of the parasite in the amniotic fluid.