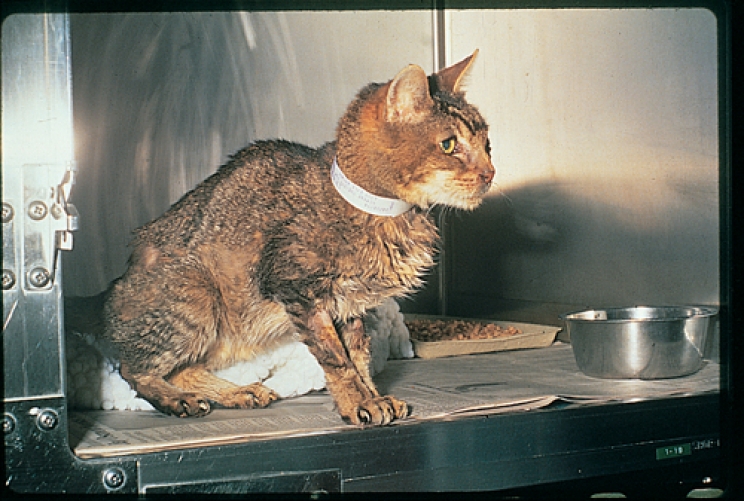 FeLV in cats: what is it? how should we recognize it? how do we prevent it?

Cats are much more likely than dogs to contract infectious diseases.

This depends on their habits and their behaviour: cats are left free to roam, therefore to meet other cats including many stray animals. A dog is practically always with its owner and, despite being more exposed to other dangers such as poisoned baits, it can be safeguarded quite well from the contraction of infectious diseases.

One of the most dangerous diseases for cats, and most feared by owners along with FIV, is FeLV, or feline viral leukemia. In this article, we will try to understand what it is, what are its effects and above all how it can be prevented.

What is FeLV and how is it transmitted

FeLV is an infectious disease caused by a virus, namely retrovirus, which is part of the same family as the well-known HIV virus (virus that infects humans) and the virus that causes FIV in cats. It only affects cats, so dog owners can rest assured.

The virus enters the organism in many ways, and this is precisely what makes the disease so contagious: once it has entered, in fact, it can reproduce in various cells of the body. It prefers those that should defend the cat: the lymphocytes, which are the body's "policemen".

These cells are found in all tissues, and are often eliminated with secretions: saliva, feces or urine. The virus has little resistance in the external environment, so we do not have to worry if the cat passes near a cat poop that has been there since the previous day. Rather we must pay attention to direct contact with other cats (especially in the season in where there are many cats ready to mate) when they bite or scratch each other and struggle to mate. We must also pay attention, unlike FIV, to the fact that the cat can eat or drink from places where other cats that may be sick eat and drink from, the virus is present in the saliva and if two cats drink at the same time, it is possible to transmit the virus orally.

Finally, if a cat is infected, the disease can be transmitted to its kittens in their first days of life, and they can show the disease from a very young age.

What does it do?

The symptoms caused by the presence of the virus vary from cat to cat, and it is impossible to predict what they will be. There are cats who even manage to eliminate the virus on their own, others who, despite being sick, have no symptoms, still others who have them very generic (fever, little desire to move, little appetite) and some that show the most serious symptoms, such as lymphomas, which are actually tumours that can come out in various parts of the body and must be treated with surgery (if possible) or with chemotherapy.

Beyond the problems that these lymphomas can cause, due to an accentuated production of lymphocytes in the cat's body (a situation that is called leukemia, hence the name of the disease) we must consider that these cells no longer work as they should, i.e. they do not they defend the organism anymore. This means that any other virus or bacterium entering the body will have a much better chance of doing damage than entering a cat that does not suffer from FeLV.

To assess the presence of FeLV (if we see any of these symptoms), we need to take the cat to the vet who will do a simple blood test. If this test identifies antibodies ("weapons" that fight the virus) against the FeLV virus in their blood, it means that the cat has encountered it in the past and that it could, with a good chance, be infected.

How it is treated and how it is prevented

Unfortunately, at the moment a cure for FeLV does not exist, as there is not for many other similar diseases (think about HIV in humans). However, there are support therapies, based on the administration of vitamins and products that stimulate the immune system to do its job, so as to guarantee a dignified life to the sick cat. Just keep in mind that they never recover from the disease.

For this reason, the only effective method that an owner can currently put into practice is prevention.

Definitely preventing the cat from having contact with stray animals outdoors is the best solution, even if it implies not letting it go outside; neutering is the best option as it makes the cat lose the urge to wander and drastically decreases the chances of contracting FeLV.

We must make sure that our cat does not eat or drink from bowls that other cats (that are not ours and could be sick), have access to. Moreover, if we have a cat that is already FeLV-positive, we should avoid adopting another cat, because in all probability, the second one would become infected sooner or later.

As always, we pay close attention to the symptoms and ask the vet for a test for the disease when we realize that the cat is manifesting some symptoms: weakness, sickness for several days.

If we have a small cat, we can instead think of the vaccine: it is a new alternative and it provides protection against the disease most of the time (not always) and is still improving.

It is performed for the first time when the cat is small and then renewed with annual intakes. Although we cannot be mathematically sure that the cat will not contract FeLV in its life, it is always better than nothing.

A combination of the vaccine and other preventive rules we have talked about, should guarantee a fairly certain protection for our four-legged friend.