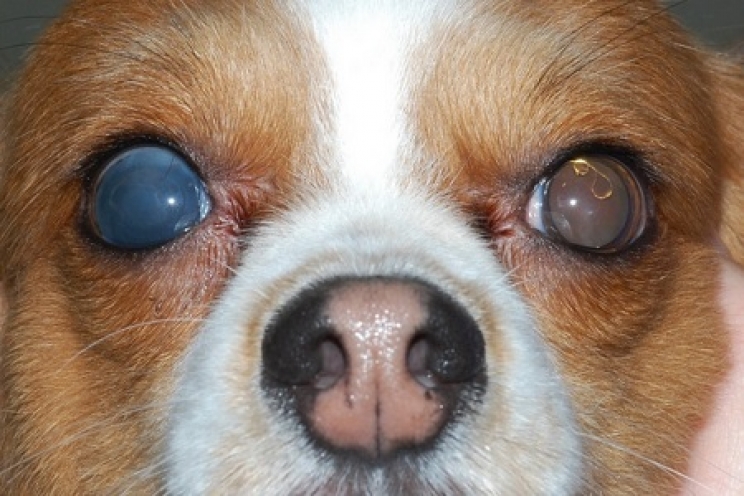 Glaucoma in cats and dogs

Among the problems affecting the eyes of our four-legged friends, one of the most frequent is glaucoma, an eye disorder that presents itself with very particular characteristics. Let's find out what it is, what the causes are and how glaucoma can be treated in dogs and cats.

When we talk about glaucoma, we refer to a pathology that occurs when the pressure inside the eye increases so much to provoke serious consequences. To explain this definition, let's try to briefly understand the eyes anatomy.

The eyeball, of which we can only see the outermost portion, is deeply embedded inside a cavity of the skull. Its surface is covered with different coating structures, which are arranged in overlapping layers, each with a specific function. The outermost part is the sclera, which in the front (the one we can see) is called cornea. Below the sclera, we find the choroid, rich in blood vessels. The innermost part is the retina, which contains all the nerves essential for vision. In the most anterior part, we can distinguish, in addition to the transparent cornea, also the iris - the portion responsible for the colour of the eye - in the centre of which we find the pupil, a black hole through which light passes. Behind the iris is the crystalline lens, a thin lens that serves to focus on the images captured by the retina, and the ciliary body.

The ciliary body, in particular, is the structure involved in the glaucoma. Its function is to produce a transparent liquid, called "aqueous humor", which helps to determine the typical curvature of the eyeball. This liquid is produced by the ciliary body, and then properly drained from a structure located in the corner between the iris and cornea. The balance between the production and reabsorption of aqueous humor ensures that the volume of liquid inside the eye is always constant, as is the intraocular pressure.

Glaucoma appears when this balance is altered, so the pressure inside the eye becomes too high.

Glaucoma is more frequent in dogs than cats, who can tolerate elevated intraocular pressure with fewer consequences. Furthermore, it tends to appear mainly in adult animals, over 5 years of age.

In general, based on the triggering causes, we can distinguish glaucoma in two forms:

In any case, among the main causes of primary glaucoma we find above all a racial predisposition. Dog breeds most prone to glaucoma include Husky, Chow Chow, Shar Pei, Shih tzu, Beagle, Cocker Spaniel, German Shepherd and several others.

In cats, secondary glaucoma is the most common, although some breeds (such as Persians, Siamese and Burmese) are more predisposed to primary glaucoma. 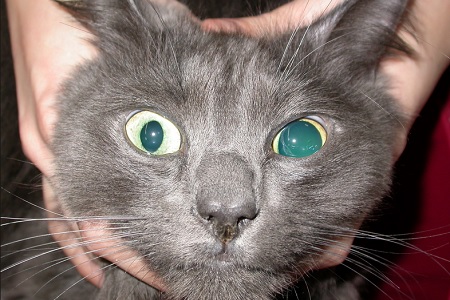 In addition to these symptoms that only affect the eye, surely the animal will also show itself sad and often unappetizing due to the very strong pain.

Glaucoma can only be diagnosed by the veterinarian, as well as with an eye examination, also with a particular instrument that can detect intraocular pressure quickly and painlessly. The normal value in dogs and cats should not exceed 25 mmHg (calculated in millimetres of Mercury), whilst above 30 mmHg there is pretty high pressure.

In cats, it is difficult for an acute form to occur, unlike the chronic one, so the symptoms begin to appear after a long time after the onset of the problem

How do we treat it?

The treatment for glaucoma is quite complex, because it often requires very prolonged drug therapy, in some cases even for life. The most widely used drugs include diuretics, anti-inflammatories, corticosteroids which are substances used to reduce blood pressure or pilocarpine, a drug that can narrow the pupil to improve drainage of aqueous humor. Surgical therapy, on the other hand, comes in when pharmacological therapy has failed to obtain good results or is impractical.