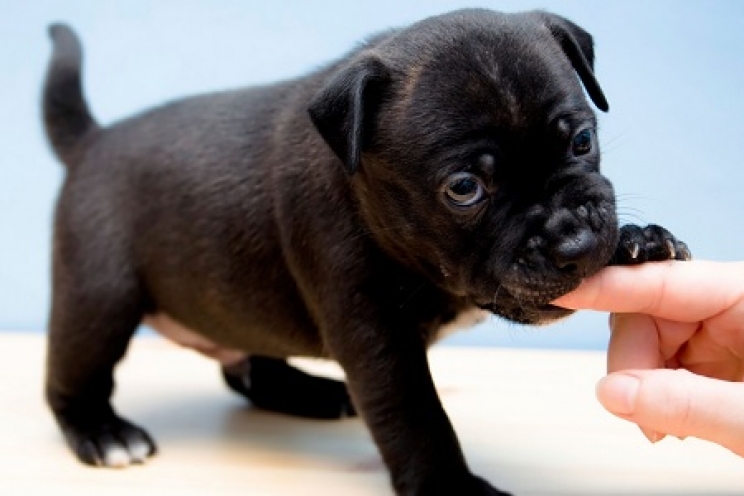 What should I do if my dog bites my hands, my feet and random objects?

One of the most annoying behaviors that some dogs can develop since they are puppies is definitely the tendency to bite hands and feet. Whether he does it to attract attention or for fun, it is always an inappropriate action, which should be eliminated from the first months of the puppy's life, because otherwise you risk finding yourself with an adult dog that continues to pounce on the hands, feet and clothing. Let's try to understand why the dog takes this attitude and how to teach the puppy and adult dogs not to bite.

Why does the dog bite?

Firstly, it would be better to talk about chewing rather than biting. All dogs, in fact, have this particular need to chew to keep the muscles well trained, to clean their teeth and even as a game. We must also add the fact that the dog's complete dentition is fully developed only after 18-24 months. Therefore, just like babies, puppies need to massage their gums to relieve discomfort.

Normally, after this period, the attitude of inappropriate chewing should disappear. In some cases, however, the dog can continue to bite objects, clothing or people's hands and feet even as an adult into old age.

Let's see what are the reasons that push the dog to bite:

What we have to do in these cases in general is to make the dog understand that by biting he will not get what he likes, whether it is a caress or simply our attention. This type of association is called "negative punishment": inappropriate action drives away the pleasant stimulus. We consider that even shouting can be pleasant for the dog that feels neglected, because in any case we are giving him attention.

The first thing to do, therefore, is to stand up, put our arms folded and ignore it. If we are sitting on the sofa next to him, let's get up immediately and stop cuddling him as hard as it may seem.

If he does not get the message and moves on top of us, we leave the room and pass into another one, closing the door. We even avoid looking at him in the eye and remain silent until he has stopped biting or following us.

A very effective solution is to introduce a voice command, such as “Ouch!”, Every time it bites us. Therefore, as soon as he grabs our hand with his teeth, we immediately say "Ouch!" and stop cuddling or playing.

Of course, teaching your dog what it shouldn't do is not enough, it also needs to be shown what it can do. For dogs, it is very important to chew, so we will simply have to make them understand what objects they can bite.

We enrich his personal playground with balls and chewable toys made of hard plastic. An excellent idea may be to use special toys that can be filled with appetizing snacks, which they will immediately find irresistible.

We can also begin to introduce the "Leave" command, which is particularly useful even in dogs that do not have the habit of biting hands, feet and objects. It is a command that must be taught to all puppies sooner or later, because it helps to safeguard animate or inanimate prey that you absolutely do not want the dog to destroy, whether it is expensive objects, birds or even poisoned baits.

There are several methods for teaching this command to the dog, all based on the reward with a clicker or snack when the dog drops the object we are using for training, for example one of his favourite toys. Playing who pulls harder is useless and stimulates the dog to bite even more.

What not to do

As we have just seen, some of the causes that can lead the dog to bite objects and people are to be found in our way of behaving and relating to him.

Among the most frequent errors we find:

By following these tips, your puppy will begin to understand the correct behaviour to become an educated dog.