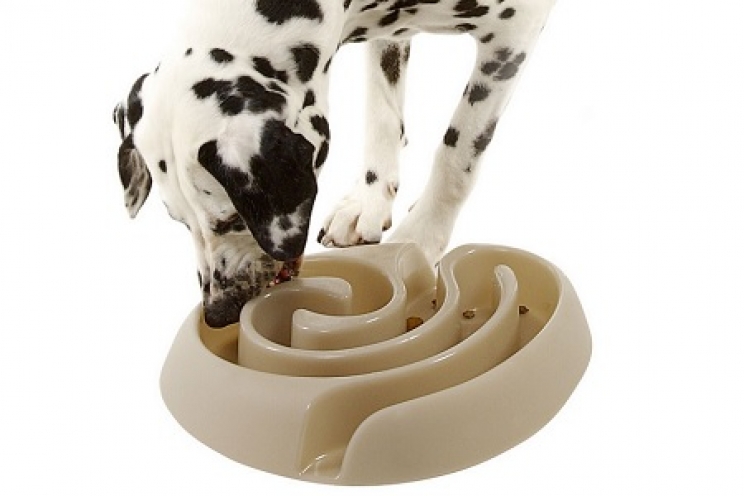 Most dogs tend to eat very quickly, in some cases rushing to finish the mean before the owner fills bowl. This attitude is not at all good for the health of the dog, which could experience regurgitation, vomiting and poor digestion. For this reason, it is very important to get him used to eating with the right peace from the beginning of his life. Let's see how.

What happens when the dog eats quickly

The voracity in the ingestion of food is a real problem, both from a behavioural and physical point of view.

In fact, when the dog eats too quickly, it has a series of consequences. First of all, the food ingested quickly will not be able to be digested in the right way, so it could reach the intestine in a semi-digested form, creating problems such as diarrhea, impaired stools, flatulence and poor absorption of the nutrients present in the food. In addition, one of the main effects of rapid food intake is mainly linked to the appearance of regurgitation and vomiting. The stomach, which receives an excessive amount of food in a very short time, reacts by trying to expel it outwards, generally a few minutes after the end of the meal. In the long run, vomiting can create changes in the stomach and oesophagus, favouring the appearance of gastritis and gastroesophageal reflux.

However, that's not all, because a situation of this type can delay the sense of satiety. In fact, when we chew, messages are sent to our brain, which perceives the amount of food ingested based on the number of chews. If we chewed a packet of crackers in a short time, after a few minutes we would be hungry again. On the contrary, by chewing for a long time our brain will feel more satisfied and fuller. The same thing happens in dogs, so a particularly voracious dog will always be hungry, regardless of the amount of food ingested.

We assume that this is a very frequent situation. Many dogs behave in this way mainly because they fear that their food ration may be taken away  from them or by other animals. Not surprisingly, voracious dogs are mainly those who have grown up or still live on farms, kennels or simply with other dogs or cats. The fear of having the food removed, pushes them to swallow it in a very short time.

A typical mistake of the owners, which can favour the appearance of this problem, is continuously handling the dog’s food, delaying its ingestion. This attitude is wrong, because it will not slow down the mealtime, on the contrary. Next time, the dog will eat even faster. So avoid moving the bowl, alternating it between one dog and the other or playing to pretend to give him a biscuit, and then remove it from him.

The moment of the meal, however, should be structured in order to calm the normal sense of excitement of the dog, who is eager to reach the bowl, even before offering it to him. To do this, we should mainly work on the self-control of the dog, an aspect that is not simple, but we can still start from some very simple tips.

We fill the bowl with its usual food before starting. Let the dog arrive, talking to him very calmly. If we began to repeat enthusiastically "Run, Fido, food is ready!", we would unleash that sense of excitement that we want to avoid. Calmly, let's sit him down and wait for him to stop barking, whining, hopping and everything related to excitement. Only once it is perfectly calm will we be able to slowly begin to lean the bowl towards the floor. As soon as he gets back up or tries to get closer, let's bring her back up, asking him to sit down again. He will have to understand that we will tell him when he can start the meal.

For the first attempts, it is enough for you to remain seated even for a few seconds, but the important thing is that the bowl remains on the floor while the dog is stationary. The signal to start the meal will be "go!" or "eat!" as you prefer. So let's walk away, let him eat alone and come back after about ten minutes to remove the bowl, which will be empty by now. He will have to understand that we will not take it away from him during the meal but only when he finished eating. It is very important, in any case, to remove the bowl every time the dog has eaten, otherwise he would eat at irregular timings during the day.

We can also use the "stay" command before starting to place the bowl on the floor, alternating it with the "go!" or "eat!" when he can start eating and is sitting down calmly.

To slow down food intake, we can choose very comfortable bowls, available in most pet stores. They are designed to make it more difficult to swallow food, thanks to the presence of small blocks inside, which the dog will have to avoid in order to reach the actual food. The toys that can be filled with food are also excellent, but they are especially useful for snacks and bites, rather than for a complete meal. These two methods also offer the enormous advantage of calming the dog and increasing his ability to focus on the activity he is carrying out.

Alternatively, we can spread his croquettes on the floor, quite far from each other, so that he will necessarily have to ingest them one at a time. 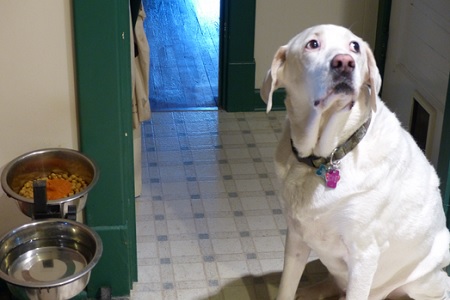